Chris Bumstead is a professional bodybuilder and born In the heart of Ontario, Canada.

According to Generation Iron: Chris has a potential to achieve the Mr. Olympia title in the future.

The prediction raises a question that Is this promising bodybuilder taking help from the steroids or is he completely natural?

What’s So Unique In The Chris Bumstead Physique?

Chris physique is according to a new generation in which the 70’s bodybuilder shape of the body is first priority such as a small waist and big chest.

He stands out against bloated gain and continuously shows off his tiny waist and none bloated stomach.

Most of the pictures are captured in a vacuum pose by pulling his stomach.

Most of the people think that tiny waist is an indication of a natural bodybuilder.

But there are a lot of examples are available on the social media related to those who are jacked combined with an aesthetic physique more specifically tiny waist.

Does small waist mean a natural?

Arnold and Calum, Both of men have accepted steroid use in front of all.

The bodybuilders with a tiny waist and very aesthetic shape of the body are using steroids within a small range.

They have done the steroid practice by proper dosage and accurate steroid cycle.

How He Gets Started Bodybuilding? 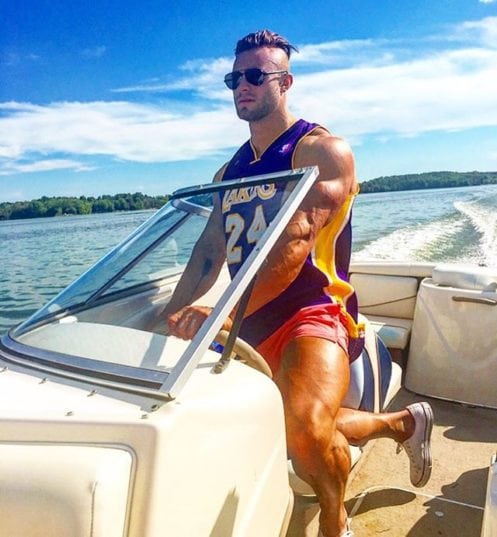 The 21-year-old bodybuilder shares his story that when he was growing up played a lot of sports and try to understand the best part of everything.

I had to train on my time. I was constantly doing the training and fell in love with the workouts. Lain Valliere, who is my very close friend inspired me and coached all the step on stage.

Where Does Motivation Come From?

Chris motivation comes what he is loving to do.

I have a strong passion for workouts and overall training and I love to see that how can I transform my body.

If we focus on the natural range, so a man with 6’1’’ height can bulk up to 190lbs (86kg) naturally, whereas Chris is higher than more lbs and exceed the normal range.

Is He Really Using The Steroids?

We have collected some physical evidence that is completely based on assumption but you to distinguish between the roid user and natural bodybuilder.

Look at his shoulders, that completely indicate the steroid practice.

To build up this type of muscle is extremely hard for natural one, whereas easy for juicers due to a greater number of androgen receptors are present on the shoulders.

Anabolic steroids are first reacting to those regions where the androgen receptors are present in the bulk amount.

2. Changes In The Skin Color:

The steroid use can cause undesired changes in the skin.

They can cause the growth of acne by producing an oil.

You can also see the red and flushed skin of Chris Bumstead, the change in skin color is happening due to an increasing temperature of the internal body.

In order to prevent the internal organs from heat, the natural mechanism can excrete the excess heat through skin pores.

Does Chris Clear Any Drug Test?

He competed with Canada’s official federation of bodybuilding states (CBFF) that conduct the drug test to become a professional bodybuilder.

We have heard from the sources that these drug federations don’t conduct any test seriously.

They have done random testing. Sometimes, they have made some changes and do not conduct any test.

The natural federation somehow conducting a proper and strict test, the rest of the federation has loaded with risk easily cheat a test.

Each day, training the separate part of the body, such as shoulders, quads, and glutes/hamstrings.

Even, when I was at the high school, I always try to increase my leg and strength for the sports.

The best way to describe my overall goal, including diet is consistency.

The diet consisted of 6 meals per day and it may change whenever I want to make some changes.

In the off-season, my eating habit is usually relaxed and eat around 7 meals per day.

The off-season calorie range is 6,500 calories, in which 5000 calories are trying to take from the clean foods such as chicken, rice, potato, steak, and flank.

Sometimes, I added Ezekiel bread with almond butter to my dish of rice and also chicken in order to get an extra calorie.

What Are The Supplements?

Chris Bumstead also used the supplements for achieving the goals.

It looks that he used the bulking and cutting steroid.

According to physical evidence, the Canadian bodybuilders probably take the steroids.

Physical appearance: 3D shoulders, flushed and acne on the skin.

The overall verdict is based on the assumptions and evidence that are not guaranteed to be correct.